Skip to content
Home » Ken Tilghman: All Paths Lead Back to the Open Road

Have you ever seen the sun set over the Tetons of Jackson Hole, Wyoming or marveled at a Disney Cruise ship gilded in gold, setting sail over the waves of Galveston? Kenneth Tilghman, city driver for TransAm, has; among many other breathtaking views he’s witnessed in his career as a veteran truck driver. “Truck driving is like being a paid tourist. You have the chance to see the whole nation behind the wheel, if you seize the opportunity,” Ken Tilghman reflected on his 22+ years in the industry. Although Ken just started at TransAm in January of 2019, you can tell he is no stranger to the industry. Maybe it’s his impressive collection of OTR tales he shares, or the natural ease he possesses while navigating the narrow streets of city driving, but either way, Ken has already established himself as a valuable leader among the driver community at TransAm. “Ken is such a joy to be around. Not only is he reliable, but you can tell he really loves what he does by his positive attitude and passion for driving,” Michelle Telke, Manager of Training and Development, said.

Ken is proof that trucking stays in your blood, no matter how many different career paths you embark on in your life. Dipping his toe in everything from an Arson Investigator to running a foster home for teenage boys, the veteran trucker has an impressive career history during his trucking hiatus. But for many life-long truckers like Ken, trucking is not just a pit stop along the way, it’s a destination, a calling that became the center point of his career. So what ultimately led Ken back into the trucking industry and to TransAm? “For me, trucking was my calling since the first time I drove a straight truck hauling alfalfa at 17 years old to now at the ripe age of 66, piloting a Kenworth down the interstate. No matter what career venture I took, all paths eventually led back to the open road,” Ken explained. The difficult decision for Ken, was not if he should enter back into the trucking industry, but what company to drive for. “I’ve worked at a variety of trucking companies in my lifetime, I knew what I was looking for this time around. Working with amazing people like my planners, Shilo and Jordan, and the quality of the staff at the shop impressed me. It made me realize this was the best company for me,” Ken said.

Just like muscle memory, Ken’s experience behind the wheel and reliable reputation as a driver is steadfast as he embarks on a new chapter at TransAm. He proudly dons a golden ring with diamonds encrusted on each side of the center piece. “Each diamond, five in total, signifies another year without a late load, and another year with no safety violations,” Ken shares of his souvenir from one of his past stints as a company driver. With his reputation of being early for his morning drop offs, it’s safe to say Ken strives to keep his streak of excellence alive for his first year at TransAm. His advice for new drivers entering is simple but profound, as he points to his truck parked in the TransAm yard: “That windshield is where your eyes are at all times behind the wheel. No excuses. Never lose sight of the fact that you are operating an 80,000 lbs., 53 foot trailer. It is an honor but it’s also a privilege that requires your complete focus,” Ken advised.

It is said that a team is only as strong as each individual member and Ken Tilghman is the perfect example of that. Although he has been at TransAm for just a few months, he brings with him years of experience that one could only achieve by dedicating countless miles to the noble profession and a respect for the trucking industry that only a true trucking veteran can have. After hearing the thrilling tales Ken has collected behind the wheel, it’s hard to imagine what the next chapter could hold, but still the question must be asked “What’s next?” For Ken, a question that could be daunting to many is a simple choice for him. “I’m happy at TransAm. I love my driver manager and the people I work with. I plan on retiring here. This is where my journey reaches its destination.”  Thank you, Ken, for choosing TransAm Trucking for the next chapter in your trucking career. It is dedicated truckers like you that enrich the trucking community and provide a lasting example of what a noble driver should be. Mentor of the Year – Kerlon Epps Kerlon Epps is an outstanding example of what a mentor at TransAm should be. He […]

One million miles on the road is a firm testament to the dedication of a driver. It is because of those very […] 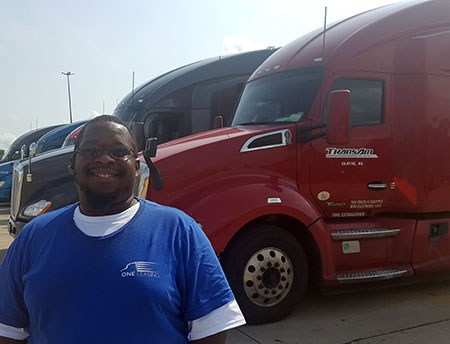 A long stretch of miles ahead and solitude are the two key things that Leslie Iverson, TransAm company driver, enjoys most about […]